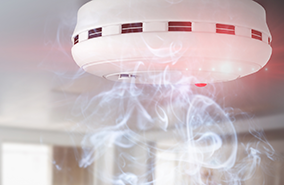 For most people, smoke detectors are simply taken for granted. But, when it’s time to replace your smoke detectors, be sure to understand the differences between the two main types.

Ionization types use a battery to create a small current that charges the ion particles inside the detector. If that current is disrupted by smoke, an alarm is triggered. Though they are designed to detect all types of smoke, they tend to be more sensitive to smoke from fast-flaming fires, such as those that might occur in a kitchen. Another type is a photoelectric detector, which powers a small beam of light that, when broken by smoke, will sound an alarm. This type tends to be more sensitive to smoke from a smouldering fire, such as a burning cigarette on upholstery.

To be safe, homeowners are advised to use both types of detectors in their homes because no one can predict the type of fire that may break out, nor where it might start. Locate them strategically based on the type. Also, be sure your units are tested regularly, and their batteries are changed bi-annually.

Let's discuss your next home sale or purchase, with no obligation.

The data relating to real estate on this website comes in part from the MLS® Reciprocity program of either the Real Estate Board of Greater Vancouver (REBGV), the Fraser Valley Real Estate Board (FVREB) or the Chilliwack and District Real Estate Board (CADREB). Real estate listings held by participating real estate firms are marked with the MLS® logo and detailed information about the listing includes the name of the listing agent. This representation is based in whole or part on data generated by either the REBGV, the FVREB or the CADREB which assumes no responsibility for its accuracy. The materials contained on this page may not be reproduced without the express written consent of either the REBGV, the FVREB or the CADREB.